Aiming to be more than a me-too response to the Amazon Echo and Google Home speakers, Apple has played its hand in the voice-activated speaker game in the form of the HomePod, a wireless speaker system announced at the 2017 Worldwide Developers Conference (WWDC) in San Jose. Slated to begin shipping in December 2017 initially for Australia, the UK, and the US, the $349 USD home speaker will be available in white and space gray colors and has a cylindrical 7-in form factor that more closely resembles the Sonos Play:1 speaker rather than the elongated cylinder of the original Amazon Echo or the more angular lines characteristic of Google Home. Apple HomePod will meld audio fidelity with Siri voice activation features when it launches in December 2017.

Building on Apple HomeKit through Siri

As anticipated, Apple HomePod will be powered by the ever-evolving Apple Siri digital assistant, and brings wide-field voice activation capabilities and Amazon Alexa-like commands to the home, a boon for homeowners with Apple HomeKit automation accessories—as they will no longer be limited to using Siri, the Apple Home app, and other HomeKit-compatible apps on iOS mobile devices for controlling their homes.  An array of six microphones on HomePod enable the dictation of multi-directional, across-the-room voice commands. Those commands will begin with “Hey, Siri.” For example, “Hey, Siri. Lock the front door,” could be executed from your armchair if the home is equipped with a HomeKit-compatible smart door lock. 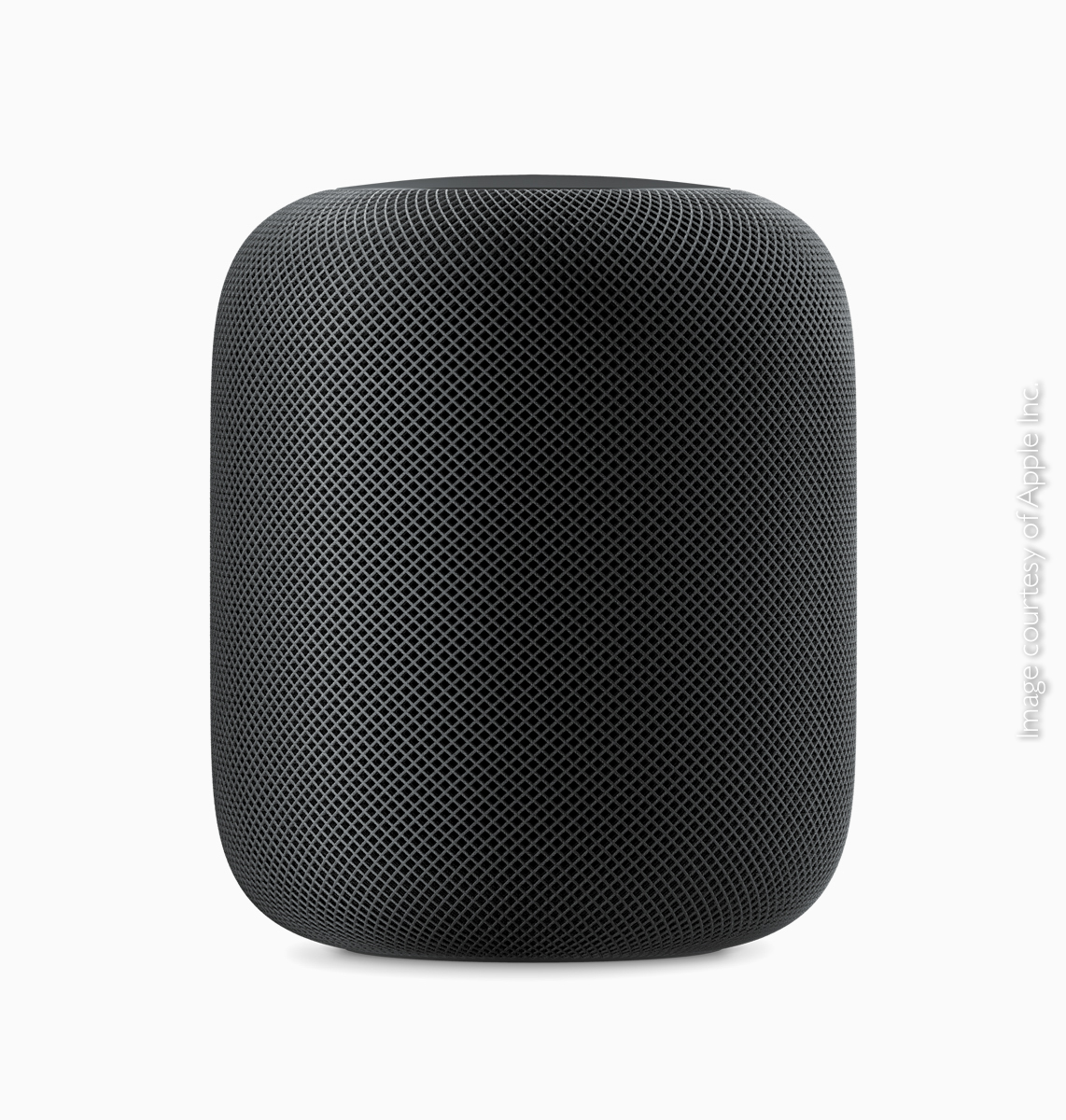 And as a further smart-home benefit, HomePod will also function as a HomeKit home hub, which will enable higher levels of scene automation and control of devices when away from the home. Currently, setting up a HomeKit hub requires an Apple TV 4th generation set-top box or an iOS 10-compatible iPad to be always-on in the home.

Going after Sonos on multi-room audio

But Apple is obviously touting the audiophile-quality sound reproduction capabilities of HomePod, and toward that goal plans to elevate the voice-activated speaker genre to higher levels of audio fidelity by incorporating an Apple-designed 4-inch woofer and seven tweeters into the enclosure. Designed to work with an Apple Music subscription (the company says over 40 million songs can be accessed from Apple Music), HomePod also incorporates automatic room-sensing technology to optimize audio quality based on the location of the speaker in the room. Additionally, when the speakers are used in pairs they automatically detect the presence of a second speaker and auto-balance the setup for optimum audio delivery quality.

So the resemblance to a Sonos speaker here goes beyond the obvious visual cues: Apple is clearly taking aim at multi-room audio streaming, though the Sonos ecosystem will likely continue to offer a much broader array of music services to select from—an extremely broad spectrum of music that already includes Apple Music, Pandora, Spotify, and more. It will be interesting to see how this plays out over time. The three primary competitors for the Apple HomePod already in our smart-home labs: Google Home, Sonos Play:1, and Amazon Echo.

Leveling voice-activation in the smart-home field

Apple HomePod will likely fill a smart-home chasm on voice activation that has opened with the dawn of the Amazon Echo and Google Home speakers, as consumers of Apple HomeKit devices have largely been left behind in the ability to voice-control their homes from across the room—though solutions from companies like iDevices have driven considerable progress on that front by integrating HomeKit accessories with the Amazon Alexa and Google Assistant services. By playing the HomePod card with the Siri assistant, Apple will attempt to level the playing field on voice activation for the smart-home domain and breathe new life into HomeKit accessories.